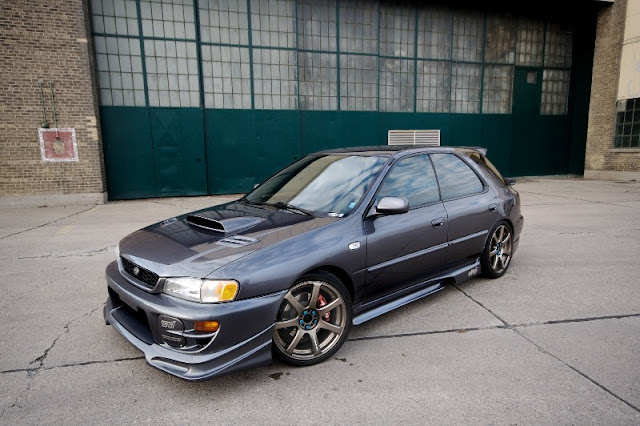 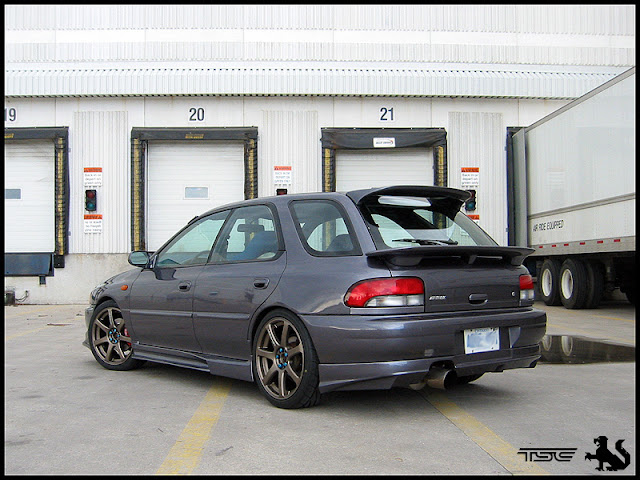 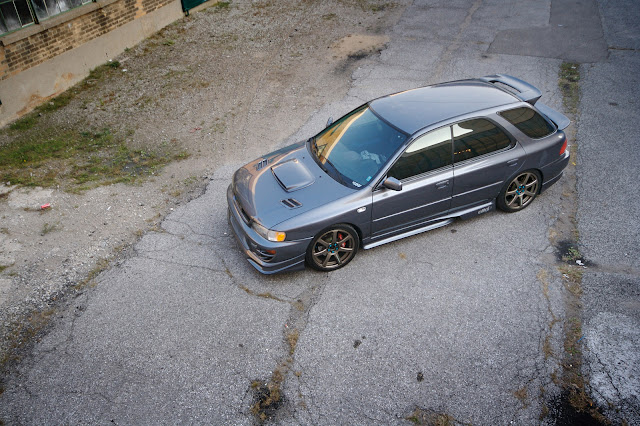 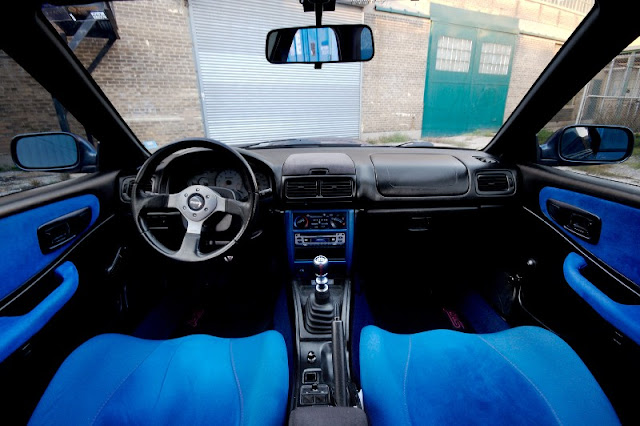 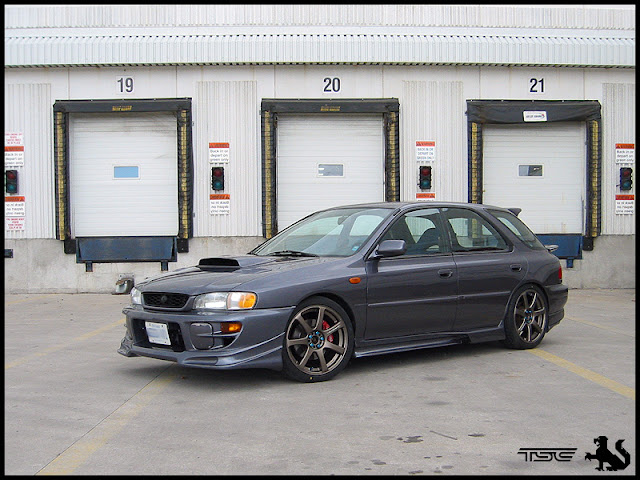 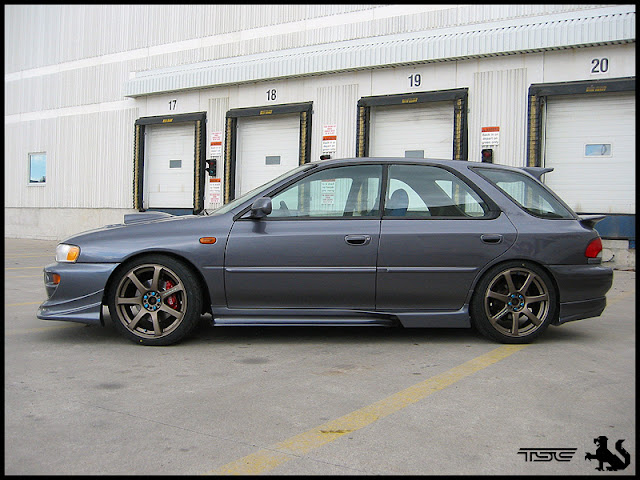 The story so far-

My name is James, and I've helped run the Toronto Subaru Club since about sometime in 1999, back in the 2.5rs club days. A few years later I assumed the lead position in the club, and have been running it ever since.

Back in the hey-day, I was rockin a 2 door silverthorne metallic 2.5RS that some might remember... http://www.toronto-subaru-club.com/p...0-0032_IMG.jpg

Unfortunately, due to financial pressures I was unable to keep the car, and a little over 2 years ago was forced to sell it. It was a tough decision, as that car and I had been through a lot, had countless adventures, and it had saved my life on the road on more than 1 occasion. When I sold it, I promised myself that I would replace it with something that I would love equally. I was patient, saved as much as I could, didn't own a car for an entire year (and still tried to run the TSC, even though it's kinda ridiculous to come to meets when you have to take the bus to get there). 14 months after selling the RS the wagon was built in it's more or less current form.

The thing about the wagon is it had to adhere to certain criteria-
1. It would be a street car, not a show car, so it had to be driveable, reliable and easily liveable around the crap roads of toronto.
2. it had to adhere to a BUDGET! Unlike many who buy a car and then continue down the path of endless modification, if I was going to make this happen and still have a functioning life it had to be cheap. The whole project was given the budget of what it would've cost me at the time to buy a used WRX, around $25k Canadian. I did manage to stick to it, and the car you see here is worth about 1/3 the cost of my buddy' Arthur (boeleni's) car, including paint, wheels... everything! It had to very much be an attainable car for anybody with imagination and a half-decent knowledge of Subarus.
3. It had to be as fast as a stock STI.

So you could say the wagon was completely planned out from the beginning, I had started collecting rare and hard to find parts (like wagon spoilers) since the sale of the RS. One notable part being the top spoiler, which I brought back with me from australia after attending my brother's wedding as my carry-on. He went right to MRT to get it for me. The Prova aero kit was chosen because of it's look and also it's rarity, and it took almost 6 months to get it from japan (they had to make it too), which was fine, since I didn't have a car to put it on!

In June of 06 I found a reasonably well preserved 1998 Brighton wagon, the base of base imprezas. Roll your own windows, only 2 speakers for the stereo and a peanut-butter/beige interior. Arthur and I picked it up in Kanata, 400 km away from toronto for $5000. We literally started modifying it as soon as we got it in the driveway! On went a set of 98 golds and the STI version 6 v-limited seats I had found 6 months prior, as well as a few other little tidbits. this only lasted a short while, as the car's interior was stripped in preparation for paint. The entire interior was removed, the beige HAD to go. While the car was in paint, I dyed the dash, door panels and every last piece of plastic trim, pop-rivets and all black. The headliner was peeled and reapholstered with black micro fiber, the door inserts and handles with blue microfiber to match the seats. the carpet was replaced with an 05 STI carpet, and I even managed to dig up an old version 6 v-limited stereo bezel I'd had sitting in storage for 3 years, which where meant to go with the seats.

The day we got the car out of paint, (the paint being mitsubishi A39, AKA medium gunmetallic grey, aka EVO MR grey) in went the suspension. A simple setup designed for street use and light track use - KYB AGX adjustable shocks with whiteline control springs. A whiteline adjustable sway bar was added later, and going in this week is a set of forged STI aluminum control arms and whiteline KCA 313 ball joint kit. an STI carbon strut brace completes the setup (for the time being)

The car then went in for the swap with the fine folks at Planet Motorsports in Guelph. Iain Fraser sourced me a pristine 2003 STI Version 8 twinscroll, with an accompanying Six Speed transmission. The only thing missing was the ECU and the wiring harness. Budget being on mind, and knowing full well an new harness, ECU and MAF sensor were gonna cost big, I went with the logical and elegant solution of a Hydra Nemesis EMS. Making the car fully tunable right off the bat, and avoiding a lot of hassles with finding, then adapting a JDM wiring harness and ECU. A manual DCCD controller was added for the time being (a neetronics DCCD controller is planned). An old, previously enjoyed JIC catback (dubbed the "community exhaust") was tagged on to expell waste gases. The car went in for dyno testing, and with the baseline map supplied by Planet, the car churned out around what stock USDM STI were pulling on Neetronic's dyno (234 whp). It was then tuned afterwords, but just to smooth out the map and increase responsiveness. At just 2800 lbs the car tears up pavement, and is extremely fun to drive.


While the swap was going on, Iain installed the brakes I had sourced. Brakes are old-school STI / 2006 WRX 4 pots with EBC Sport rotors and EBC Redstuff up front, RS Discs were put in place of the stock drums out back.

Taking advantage of Arthur's WORK Wheels sponsorship, a set of Bronze XT7s in 18x7.5" were procured, shod with yokohama parada spec-2 in 215x40r18 from Tires23.com, a TSC Vendor.

So there you have it, the STI a dude driving a new RS could afford to build. I think the accessibility of this car gives it it's charm, that and it's a wagon. The car was finished around September of last year, and has pretty much stayed exactly the same since then. I've since gotten married and moved into a shared house, so maybe this year the car's budget can be extended a little bit so I can finish a few things, notably the awful stereo, with the 2 door speakers, and the original acadia green engine bay.

I owe a lot of people a lot of thanks for helping get this project done on budget, Arthur, Dan, Kevin, Jay, Ryan, my brother Derek, Derek from Group A, Iain and the crew at Planet, Paul and Andy at Neetronics, Rich at CanJam for his advice, and Chris Hoare for the awesome shots! 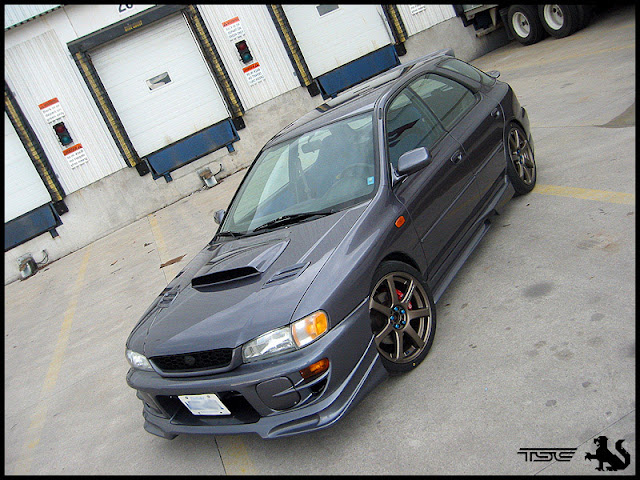 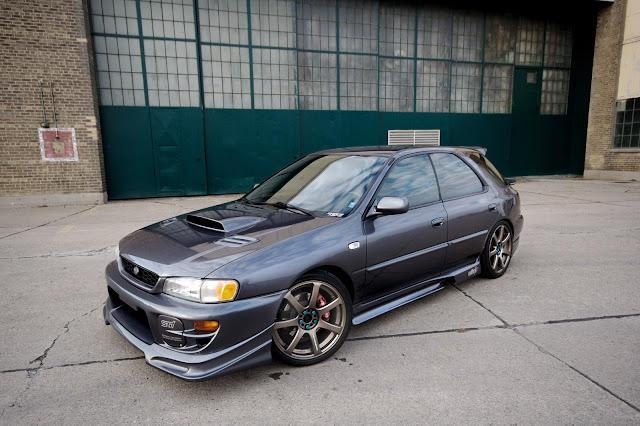 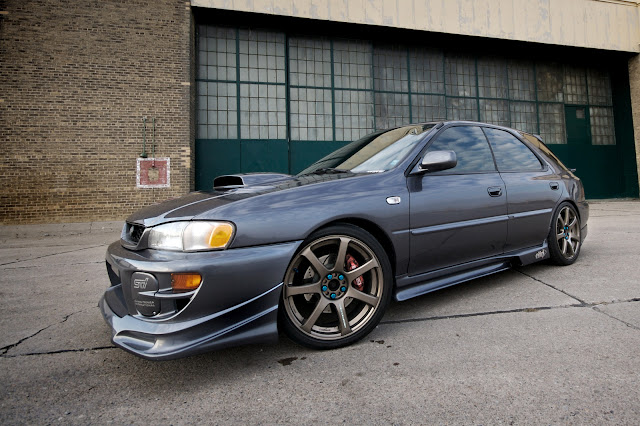 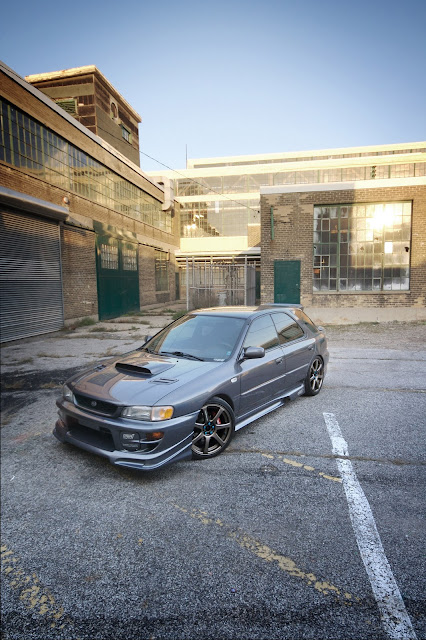 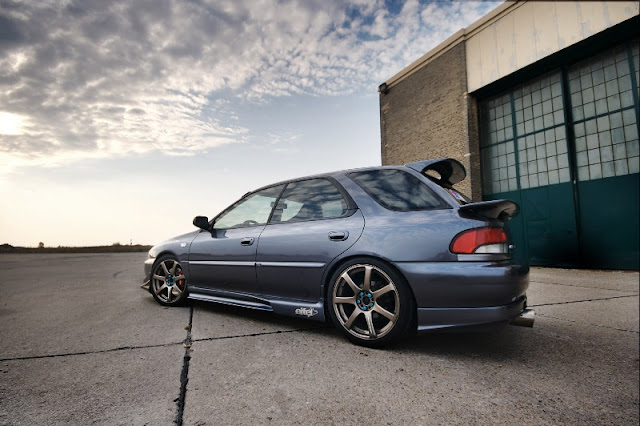 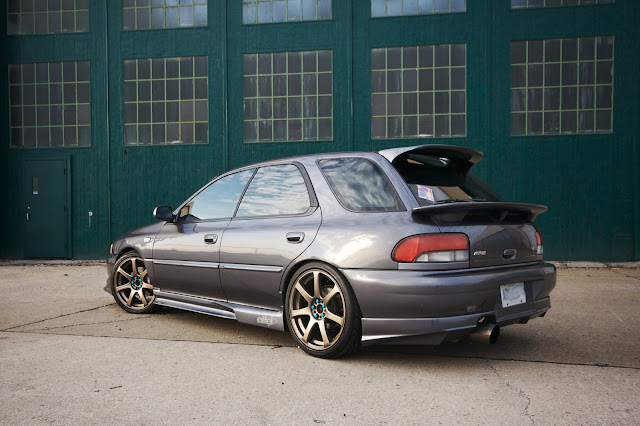 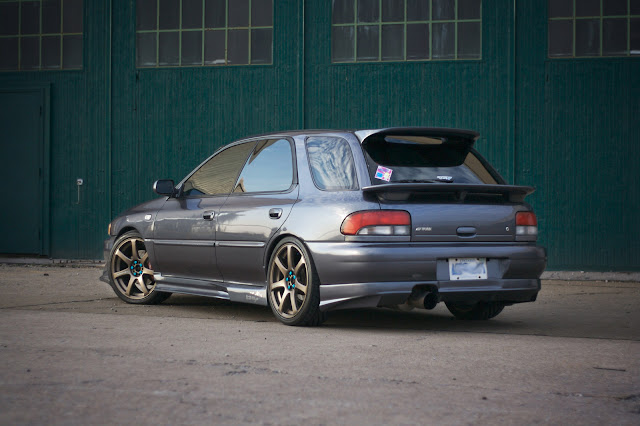 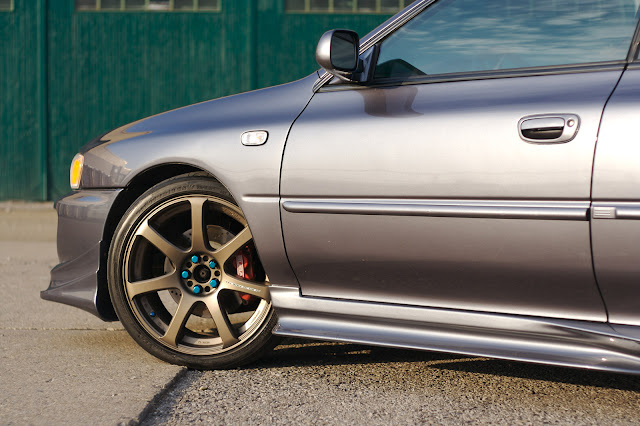 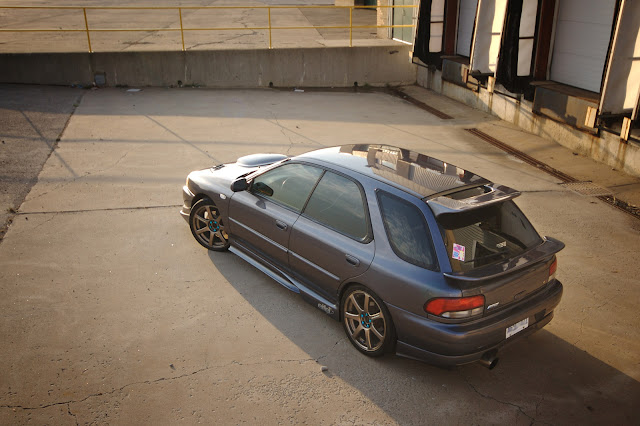 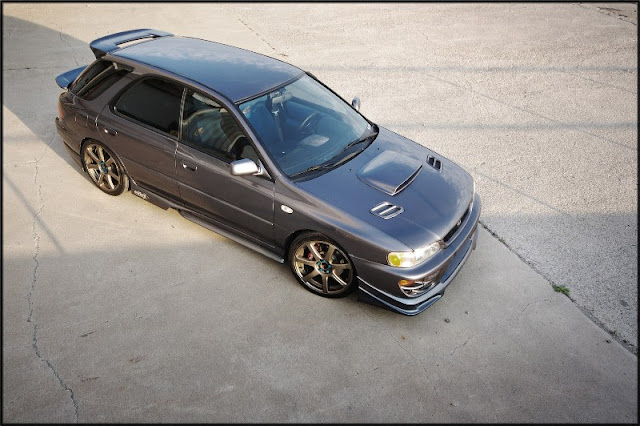 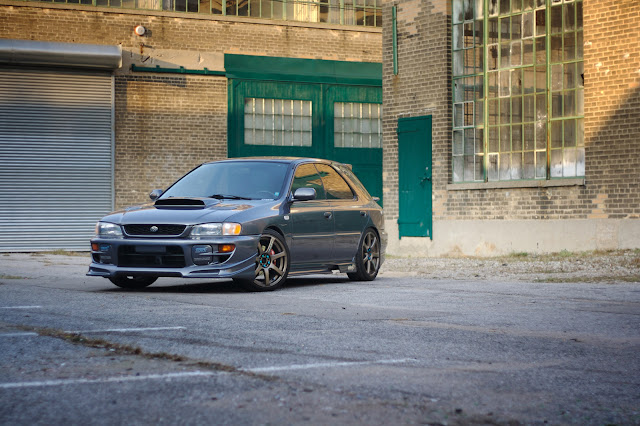 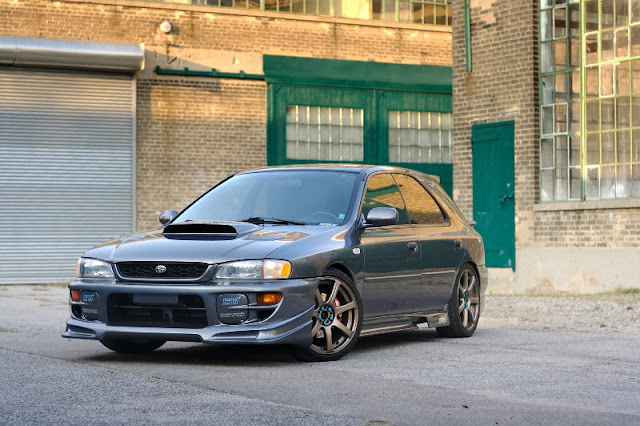 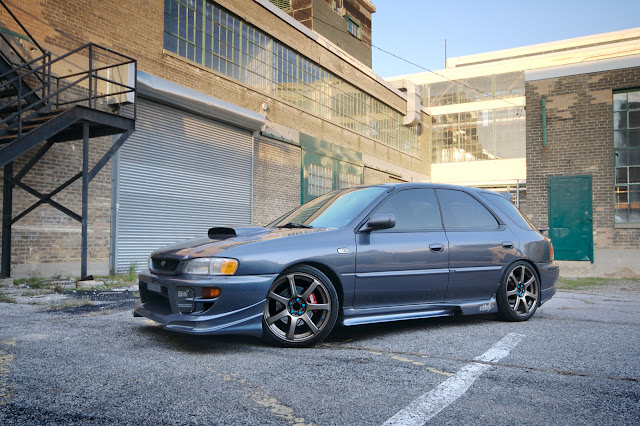 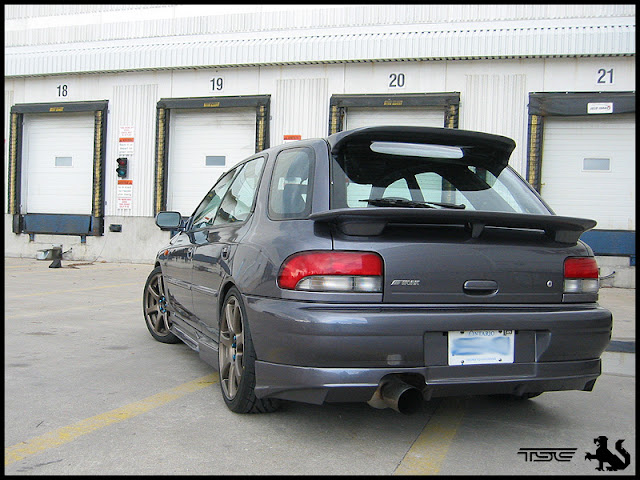