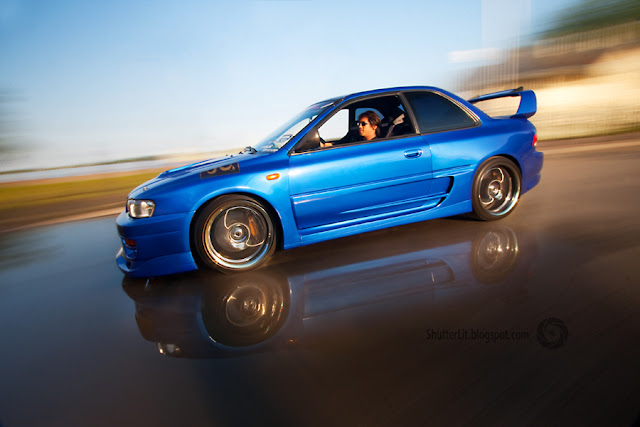 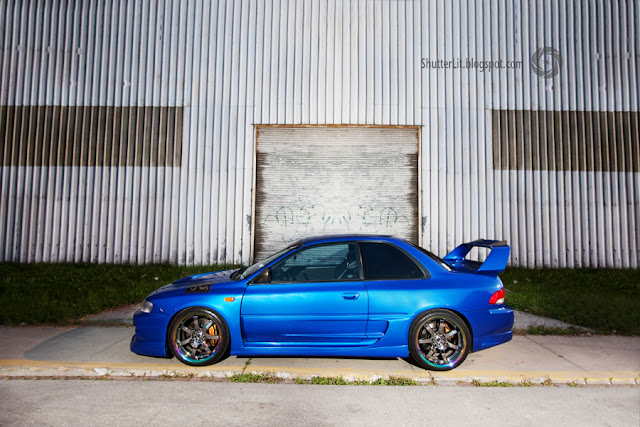 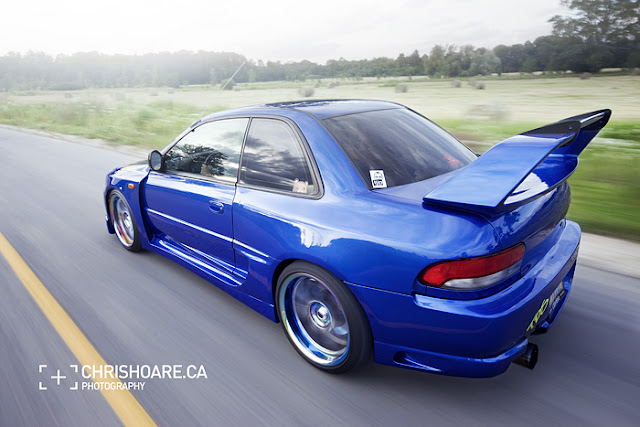 Hey all. Been waiting a long time to tell my story on Nasioc, car isn't quite "done" yet but I guess I can always post an update in the future.

I bought this 99 2.5RS in 2000, roughly 4 months after it's original owner bougt it off the lot and then had to leave the country. It was my first car, and has grown up with me over the past 8 years. I wasn't really interested in motorsports until I had bought this car and sought out fellow owners who always seemed to be at an autocross or track event. So despite not knowing how to really drive a 5 speed I dove in.

Over the course of the next few years, I tried a little bit of everything, Autocross, Rallycross, Winter Rallys, Drag Racing, Track Lapping. I modded my car for weekend warrior duties, culminating in a 99 JDM RA drivetrain swap, complete with 4.44 final drive. Also at the time I was lucky enough to be offered an internship of sorts working with Subaru Rally Team Canada maintaining Pat Richard and Tom McGeers championship winning cars. What I learned through motorsport has molded my vision of what I wanted to do to my RS.

2 years ago my luck ran out, I hit a patch of ice over a crest and slid off into a deep ditch, effectively rolling the car into a tree. It was at this time I decided to retire the chassis from motorsports, to be pampered on the show circuit and act as my Sunday driver. I slowly began replacing racing bits with more streetable parts, and the result of that is what you see here.

Body
After my winter incident, I realized i'd be replacing alot of panels. My first instinct was 22B, but the panels were prohibitively expensive (20K!). I worked out a deal with Aerosim but that kit never really came to fruition. As luck would have it, I had gone to Tokyo Auto Salon in 2002 and spoke to Scott Laking at Trial Tuning. I had always loved the Trial TRY-R widebody (as I'm sure most old GC owners have) but not only was it spendy, there were only 5 ever made. Scott had one kit hiding in Arizona for his own personal car that he was going to build when he returned to the US. Flashforward back to the present (2005). I got an email from Scott and he was happily married in Japan with a 3rd child on the way. He offered me the kit, and the rest is history. I left my Prodrive WRC mirrors, and didn't bother replacing my rad support which was bent while attempting a river crossing, but the rest of the car was completely transformed. I chose to paint it Candy Thunder Blue, a Kawasaki Ninja color that looks alot like WR Blue in some light, but a lot fancier in others.

Engine
I really went for the less is more approach with the engine. I reran all the lines. Ripped out the ABS and hardlines, replaced them with braided lines and the stainless fittings. Also re-ran my coolant and fuel lines. I re-wired everything and tucked it all away out of sight. My brake proportioning valve and fusebox were moved under the dash. I shaved the holes I wasn't using anymore in the firewall. Next was cleaning up the engine itself. Polished the intake manifold and valve covers, painted the timing belt/cam covers. Then I had a GT3076R mounted as high as possible, with a Greddy 47mm external wastegate. I had the plumbing fabbed up for my Lateral Performance Intercooler/Rad combo to be as close to symmetrical in height as possible. Also the Blitz BOV was mounted high so everything is nice and visible. Finally, a 5" intake into a Carbon Airbox. I'm running PE 850cc injectors, with Autronic engine managment (still looking for someone to tune this thing!). I still have my BPM equal length headers for that old school WRC sound, running out a custom 3" exhaust into an HKS Carbon Ti muffler.

Drivetrain
I do alot of roadtrips with this car, so the 4.44 RA box had to go. I swapped in a Ver7 6 speed and R180 rear diff. While I was at it I decided to go 5x114 and got the 07 hubs and suspension geometry. Apex'i coilovers came out in favour of Tein Basics since the knuckle for the 07 was changed and I wanted a soft ride. Wilwood brakes removed in favour of the STi Brembos. I got Project Mu 2 piece rotors (not pictured) to spice it up.

Wheels
Changing bolt patterns to 5x114 meant I could finally try some wheels that I had always wanted from GTR's and FD's I'd seen over the years. But in the end the Gram Lights Titan Lip won me over. I was a bit skeptical about putting 19's on a GC, put they seem to have the right proportions. I'm running 19x10's all around with 265/30/19 KDW's supplied by BF Goodrich.

Interior
I like plush interiors, so I've decided against the typical show car roll cage and fiberglass/carbon everywhere. Instead I wrapped the dash in grey suede for a more upscale look. I now have Sti Ver6 seats, STi Blue carpet, a black headliner, and a quick release steering hub for my Nardi Classic steering wheel. Working with Clarion Canada, I have a 2300Watt stereo system. Signature Series components custom mounted in the doors, each driven by the 2 400W amps in my back seat. The Amp rack is blue carbon fiber under plexiglass, surrounded by a dark blue suede. The box (on my rear seat bench) holds to 15" subwoofers powered by the big 1500W amp in my trunk, mounted in a mirror image to my back seat. I used real Work Meister S2R 18" wheel centers as speaker grills, hopefully Mackin get get me some new ones to match my new wheels! Everything lights up pretty in blue, and it sounds great

So there you have it, I hope you like it. It's come a long way from the days I would go race and come home to spray paint the doors that had been stripped of paint from the gravel spray. Now i'm waxing and washing her every other day. Once it's tuned I hope to take it out for more spirited drives again, but have to be careful since everytime I need a new panel Trial has to bust out the mold and hand make it ($$$!) 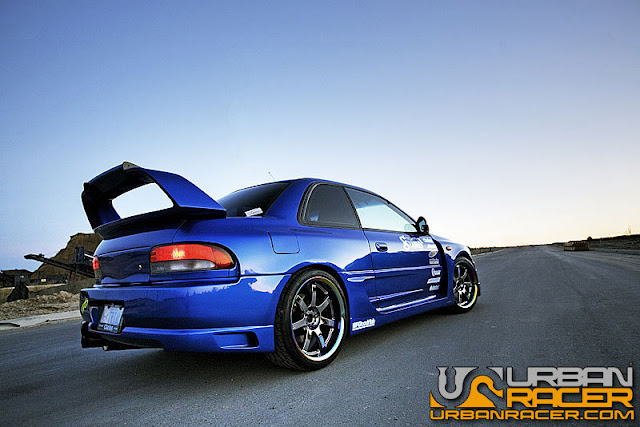 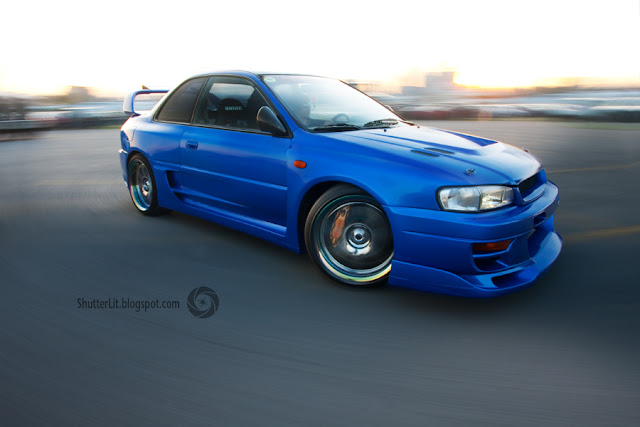 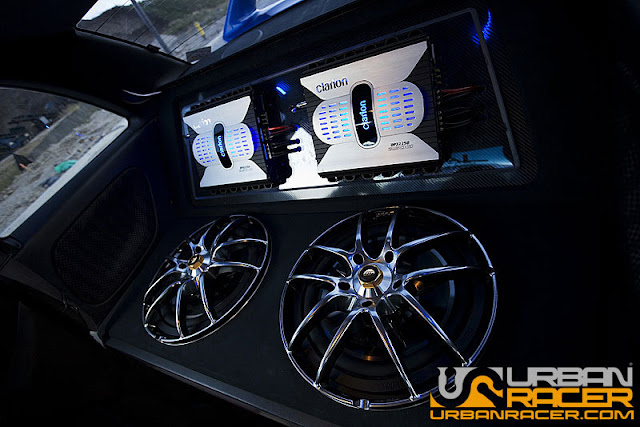 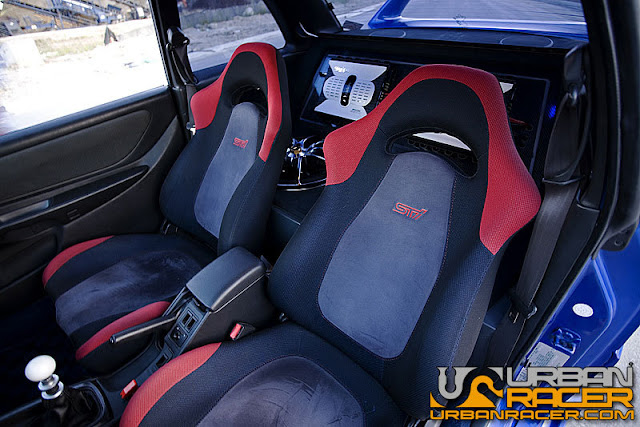 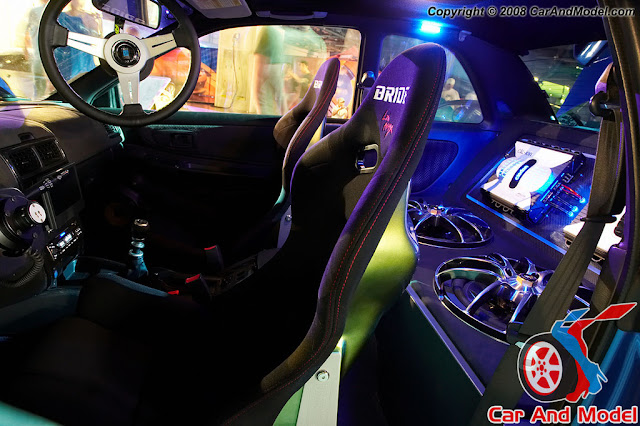 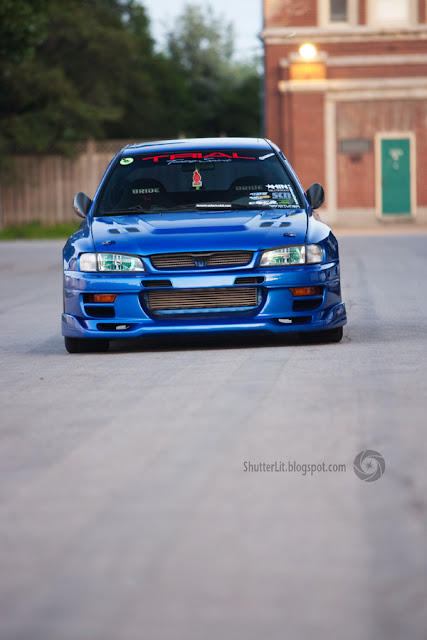 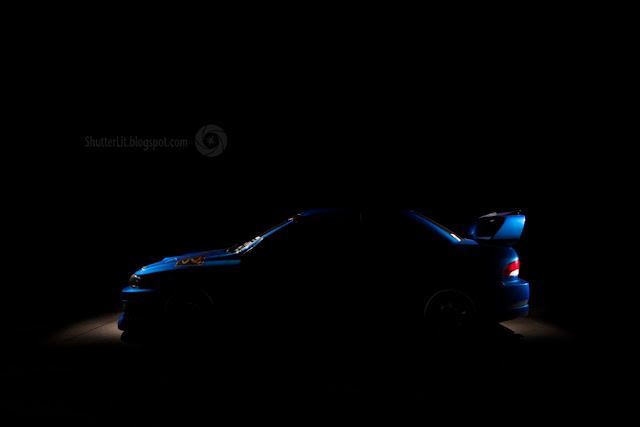 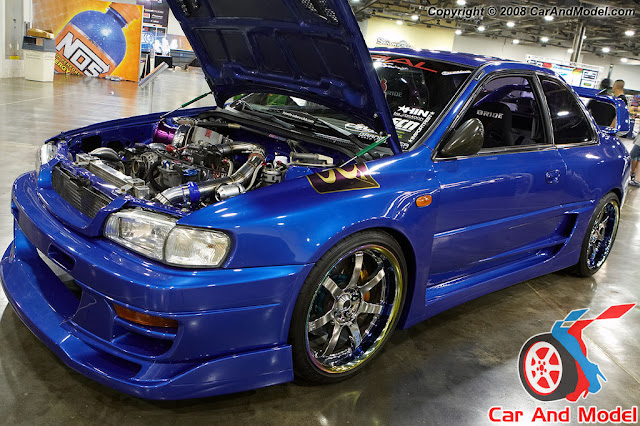 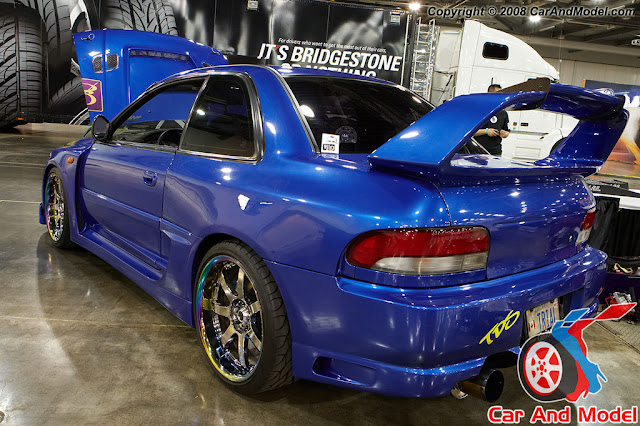 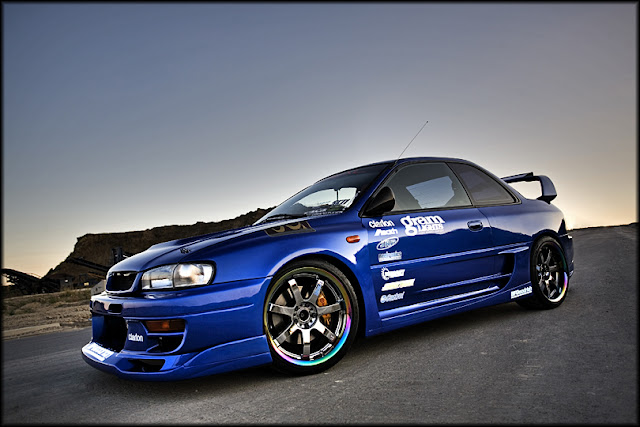 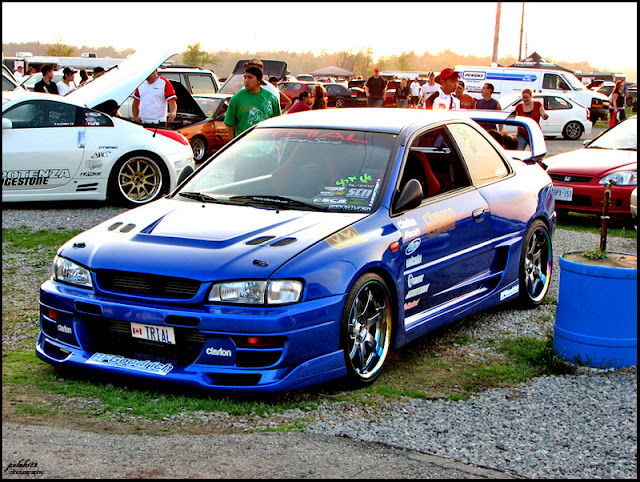 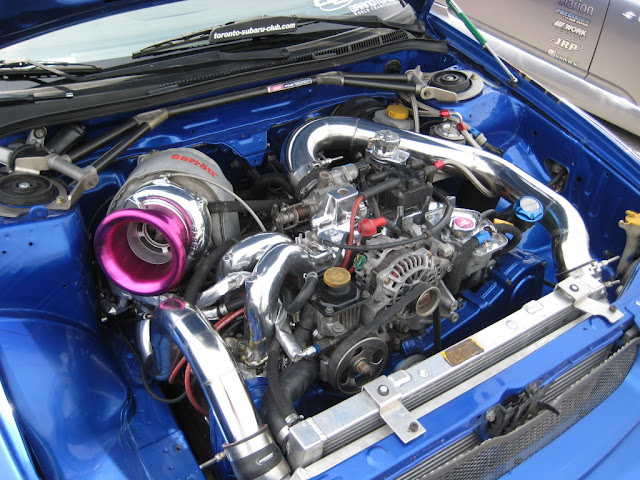 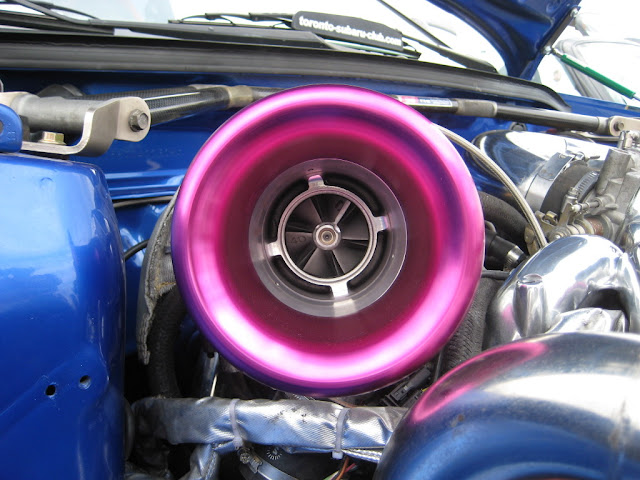 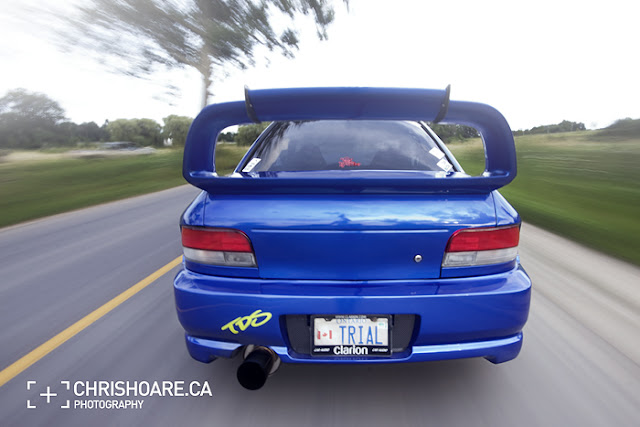 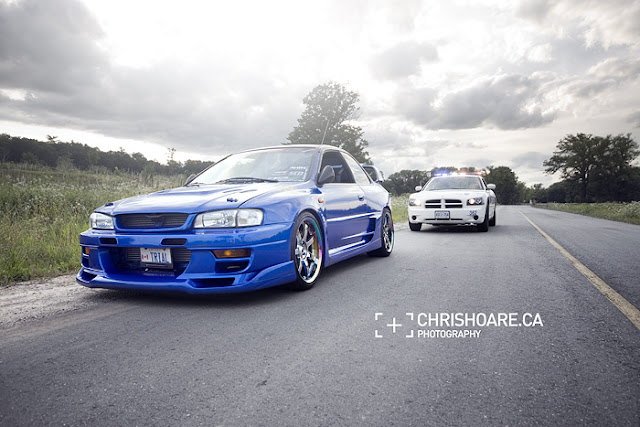 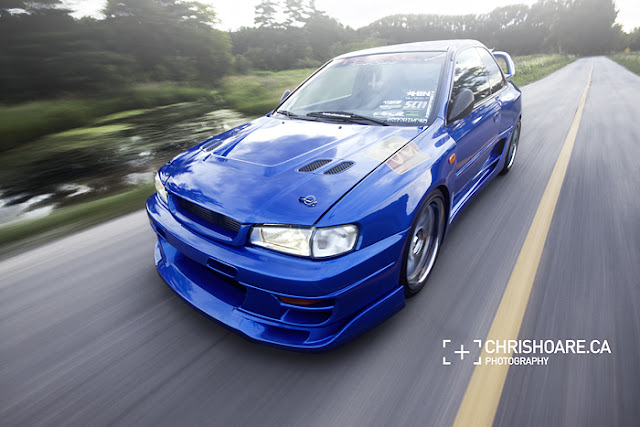 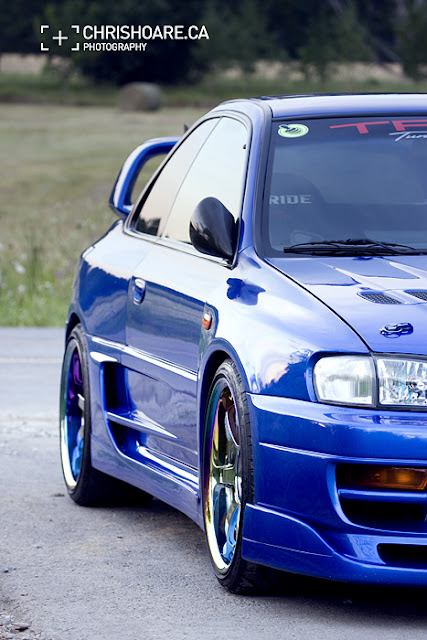 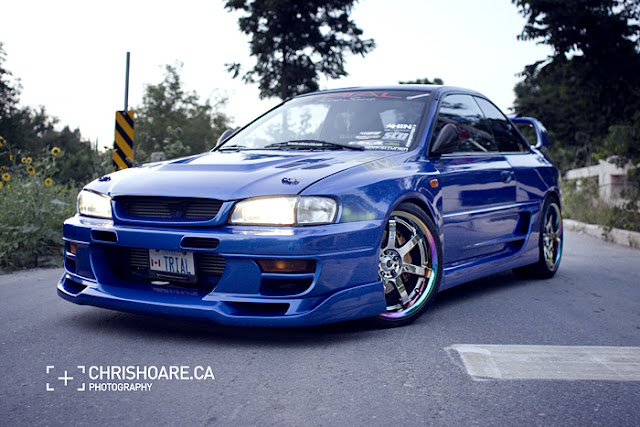 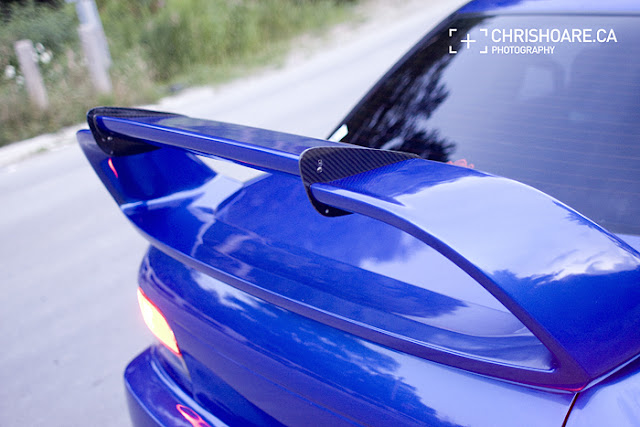 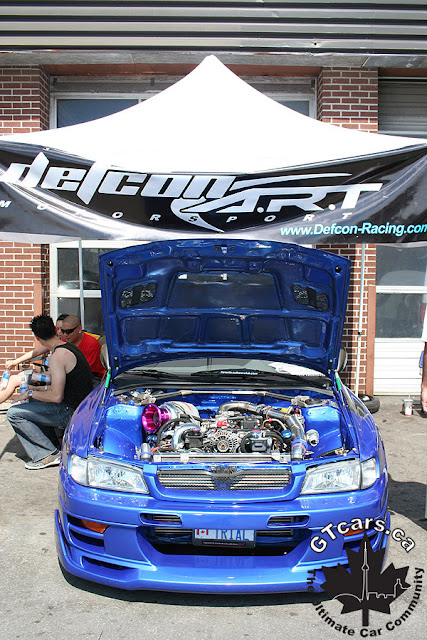 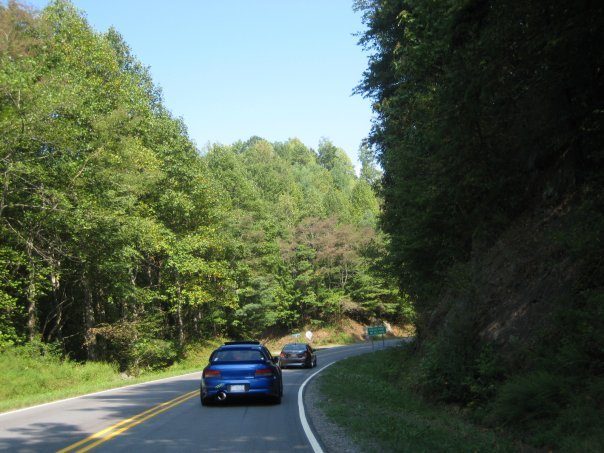 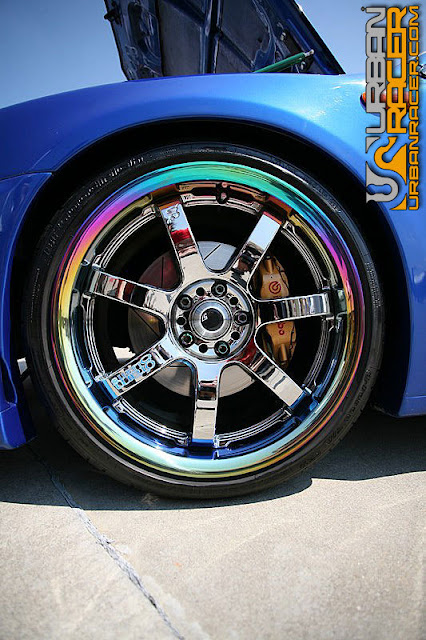 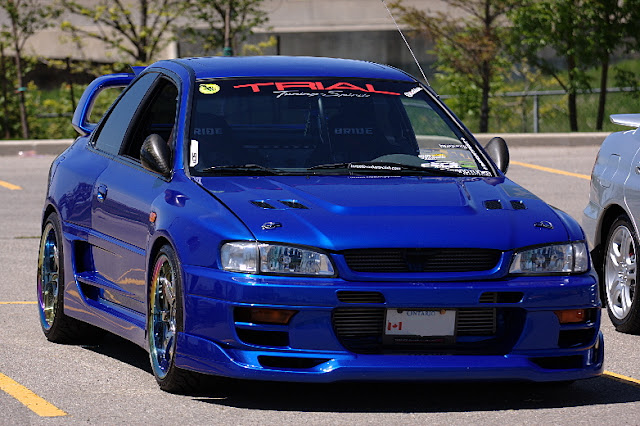