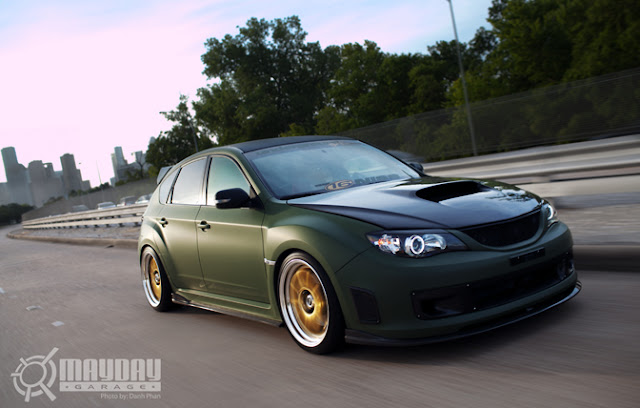 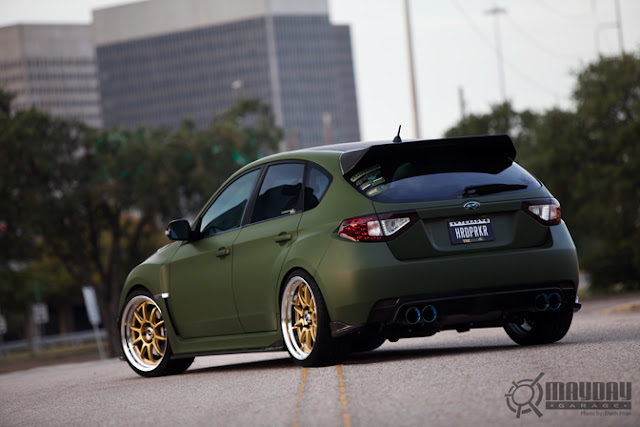 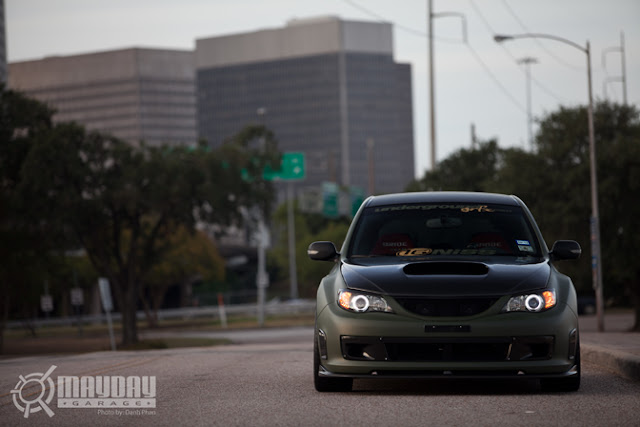 Some people remember me from my beginning stages starting with Honda, …first a 1995 Honda Civic EX, followed by a 1998 Integra GSR sedan. Some might think even with a recent stint in a 2001 S2000, I was a Honda guy. Wrong. After trading in that GSR for a 2002 WRX, the Subaru turbo boxer engine won my heart. I’ve owned 5 Subaru’s in less than 10 years. First was a 2002 white WRX, that one lasted just a few months and lost it’s life after 5x rollover. Number two was a 2002 silver WRX that was a full-on HIN trailer queen. Number three, the 2004 STI in Java Black Pearl, …it also followed suit. Number four went to my wife, in the form of a Tribeca SUV (now also retired for a QX56), and number five, ….well here we begin.

So, lets talk about the 2008 STI. At the time of purchase I had just sold my Lexus IS350 for an Avalanche, I was just about complete with my S2000 build and money was a bit tight. Then there was Wally and this Subaru “Special Year End Clearance Sale” on remaining 08 STI’s. 0% financing, up to 5 years, 0 down, …It was tough seeing all my Subaru friends buying them up at these great deals, …If I recall correctly, Wally sold 16 STI’s in the month of December. He knew I wanted one, as I was working on his first Gillman WRX Project and kept nagging him to let me buy it when the project was complete. January rolled around, and he told me there were two left, …”Greg,if you want one, this is the time”. I was tired of black cars, so I said I’ll take one in white. He replies, you can have black or black. LOL. Done, …I was back in another Subaru, another STI, another black car, …another black STI.


As many know, I love carbon fiber. Since the decision was made to take a more serious approach to the car, I was in search of all that’s carbon fiber. A hood seemed an easy choice. While I could have easily called upon Chargespeed for more of their JDM goodness, I chose a different route. I called Carbon by Design. If you don’t know them, don’t be surprised, not many do. Carbon by Design was commissioned by Subaru of America to build the hoods, roofs and rear wing for the Rally cars, even Ken Block’s famous Gymkhana STI(s). I had only one concern, as the nit-pick guy I am, I had to have the weave match the Chargespeed lip kit. Most carbon from Japan comes 1x1 (basket weave), which is a lot tighter than a regular 2x2 weave most commonly used and seen. To my good fortune, the guys at Carbon by Design were happy to do me a one-off in that 1x1 weave, …while they were at it, They also did the same for the rear extended wing (commonly branded as a Crawford Performance wing), …and just to make it even more special, I opted for a carbon fiber underside of the hood as well.

Things progressed, a few parts here and there. I swapped the STI shift knob for an ARC titanium bit, installed a Perrin front strut bar, and sent the headlights to LightWerks to remove the amber reflectors. While they were there, I had them add the “angel eye” kit. My lights were the first where set they had removed the light ring and installed it separately from the kit for an install where it’s hardly recognizable. A Perrin BOV was installed for a little bit if engine “bling”, as well as the APR carbon alternator cover.

I had the fortunate opportunity once again to have Jarred Bowen of PDX Tuning come down to Houston, (he tuned my previous 04 STI), for a personal tuning session. Before the session, I installed an AEM intake, since a custom tune was to come. Jarred and Nathan (formerly of TurboXS fame), had their way with my STI. We never got it to a dyno, as this was all road tuning, but their expertise estimates 300 hp / 350 torque. Not bad for just a few simple bolt ons.

Now we begin 2010. Time for change. Import Reactor was coming up, this is where Houston likes to debut their newest stuff. I’m no different. I special order SSR’s newest wheel, the SP3 in my usual choice of SBC finish in another aggressive fitment. Nothing too crazy, as I’m not a huge fan of the stretched tire look. But I did manage to fit some meaty 275’s on all 4 corners on the Suby, …the rims may look staggered, but they are not. 19x9.5+35 with NR wheel disk in the front, and 19x9.5+30 with SL wheel disk in the rear. Normally these take 3 months to ship, but I paid to air freight these suckers so I could have the first set in the states and in time for the event.

Along with the new rollers, I also needed a new set-up on the suspension for the new wheel fitment. Tanabe USA once again comes through for me. While they offered the Tanabe Sustec PRO 5 in Japan, it was still undergoing some final testing and was not yet available in the states. This was also completed and sent with the wheels. I was now the US test bed for the first of 5 sets to be sent across the pond. Corner balanced, lowered and aligned at Track Time Performance, Curt managed to actually keep the setting right on the edge of factory settings. Amazing. 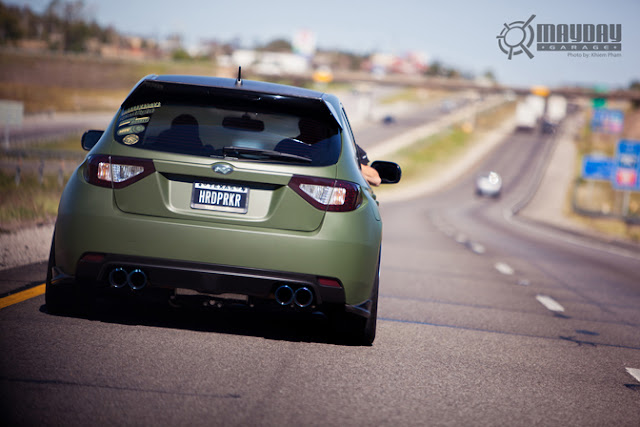 Moving on to more rarities is the BRIDE Stradia Japan Edition seats. 2 of only 150 made, you won’t be seeing too many of these around. Black suede with carbon fiber shells, lightweight and comfortable, …as long as your on a diet. (hey, Subaru rally driver Dave Mirra approved when he signed my dash, sitting in them at the recent Gillman Big Event 2.) Not to let the seats steal the interior’s thunder, I had Custom Car Stereo work their magic in the hatch. As aforementioned, the S2000’s system, while looking great, left a lot to be desired in the sound department. I spared no expense, I wanted a system you could feel, that had the latest technology and looked great. Custom Car Stereo stripped the interior, Dynamatted the roof, all the doors and the hatch. What was estimated to be a 2 week install ended up being 6, …but in the end it was all worth it. The sound is amazing, and the install definitely draws attention. Oh, and the JL logo over the ports was my idea.

As we neared the end of 2010, I was totally content with the car. It followed the theme I was looking for, but it still lacked a little more visual appeal. I wanted that subtle difference that people would ask, “what’s different here?”. I sent the bumper over to Steve at Excel Body Shop, we removed the pillar in the sport grill, and had to do a little cutting here, a little adding there, but it worked very well. Hiding behind the grill is a set of Hella Supertones painted flat black. I also removed the factory fog lights (another option from the factory that was eventually deleted), in favor of the APR Performance carbon brake ducts (also in 1x1 weave). Last was the new version 2 front lip from Chargespeed along with a set of carbon fiber eyelids. What used to be a friendly smile up front was now a menacing grin. Mission accomplished.

Having had some experience in building Subaru’s, this one wasn’t crazy, but it shows what could be done without doing just that. Not many have been working on the new GRB platforms as well, so I felt the car could still stand out in a room full of Subaru brethren. The car sits with just under 8000 miles (hence my nickname Mr. Hardparker, thank you JohnP). I go through cars like Tiger goes through women, so in new news, as you may have already heard, the STI is officially up for sale and I have taken on another car, …one that may surprise many, including myself.